Do you remember what you enjoyed doing when you were 13-years-old?

Whatever it is that you were into, I can guarantee that it didn't involve building a tiny home in your family's backyard. Then again, not every 13-year-old is Luke Thill.

Luke, a middle school student from Iowa, was browsing the web when he stumbled upon a tiny house idea that inspired him to construct his own.

"I was just on YouTube looking around and came across a tiny house idea and then that spiraled into looking at almost every YouTube video there is, it felt like," Luke told ABC News. "I got obsessed with them and decided to build my own."

The ambitious boy convinced his parents to allow him to build his very own 89-square-foot tiny home on the family's property, but it wasn't without some compromise.

"We said, "˜If you're that serious we have to set some ground rules,'" Greg Thill, Luke's father, explained. "We told him he had to have the financial responsibility of it, raise the money and choose the materials and stay in the budget." 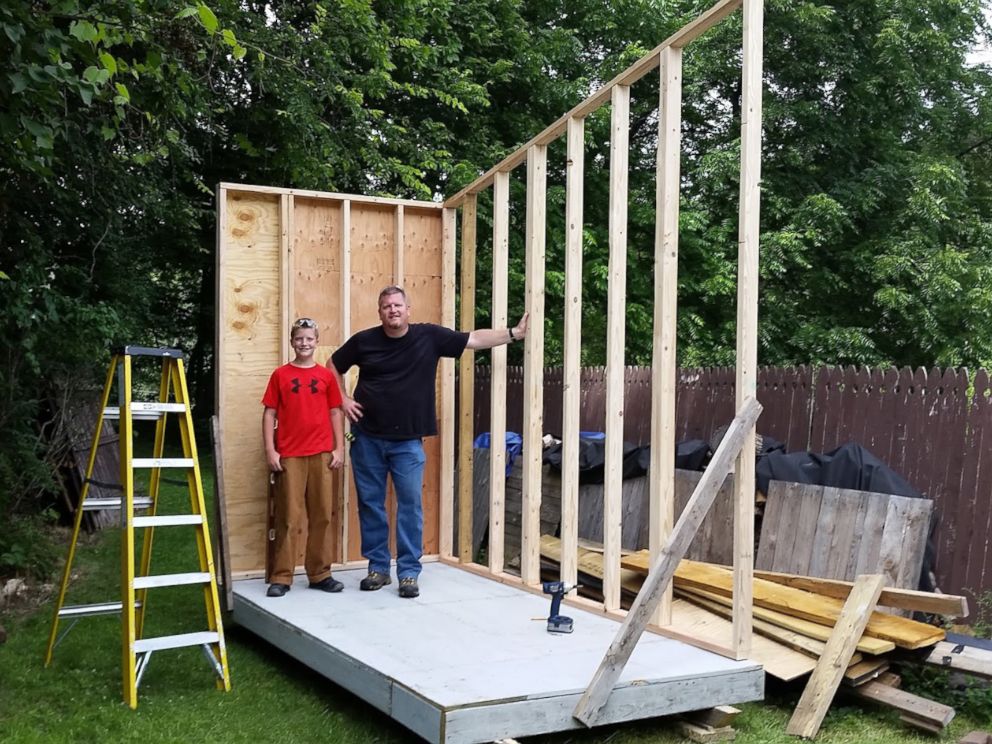 He raised about $1,500 to cover the cost of the materials, then spent about a year constructing it with some help from his family members and neighbor.

"He's a very driven kid for his age," said Greg. "There were times the project got stalled out and he had to earn more money for the next phase. He wouldn't let it go and kept working at it."

Now, the construction on the tiny home is finally completed and Luke is ready to show the world the final product. He even filmed a video in which he documented the construction process and gave viewers a tour of the house.

Luke applied skills he learned as a Boy Scout and from his electrician neighbor to make sure his house turned out well.

"I have a neighbor who is a professional electrician so I cleaned his garage out and he taught me how to wire the house," Luke said. "And in Cub Scouts I knew a guy who was a carpet layer and I mowed at his apartment buildings and he helped me install the carpet."

One year ago today I started building my tiny house so much has happened since then.thank you to anyone that helped me.

Luke also paid special attention to the details on the inside of the house. The interior, which is friends describe as "cool," includes a seating area, a loft bedroom, a kitchen equipped with a mini refrigerator and a hot plate, a television, and a fold up dining room table.

Although Luke initially started this project without any intentions of becoming a sensation, he is now happy to share his work with others, especially kids, to inspire them to follow their dreams.

He has become a sort of celebrity and was even recently invited to speak at a tiny home conference in Iowa.

"Now lots of kids have messaged me and showed pictures of their tiny houses that they're building and they're even younger than me," said Luke.

Luke still has a few other projects up his sleeve, including helping his brother build a teardrop trailer. Since his current tiny home is just meant as a "starter home," he also has plans to build a bigger one.

"In a couple of years I want to build a bigger house and stay in it full-time," he said.

"Everyone had to have a big house, and now people have changed and realized it's not practical," Luke Thill said during his speech at a tiny home festival. "You can save money, travel the world and do what you want instead."

You can take a peek inside Luke's tiny home in the video below:

A global, daily guerilla war is being fought out in the casinos of the world. To be clear, I'm not referring to the publicized conflicts between regular clients and the establishment. I'm referring to the clandestine struggle between casinos and advantage players, who are gamblers who employ various strategies, including comps and legal play, to get an advantage over the house.Of course, some of them finish losing as much as the rest of us
Read More →