When Anna Faris found out she was pregnant, she was excited to welcome her first child with then-husband Chris Pratt. Unfortunately, the future wasn't going to be as smooth sailing as she had hoped.

The 40-year-old Scary Movie actress had finished a number of successful comedy movies, such as What's Your Number?, which also starred Chris. The couple were finally ready to settle down some more.

"I've done all kinds of cool things as an actor. I've jumped out of helicopters and done some daring stunts and played baseball in a professional stadium, but none of it means anything compared to being somebody's daddy," Chris said in a speech at the March of Dimes Celebration of Babies.

Like all mothers, Anna waited patiently for those nine months to run its course, but fate had something else in store for the family.

Only seven months into her pregnancy, her water broke.

"I woke up at two fifteen to a massive gush. The bed was soaked, and even though I felt the fluid coming out of my vagina, I smelled it to make sure it wasn't pee," she said.

In her new memoir, Unqualified, Anna opens up about the emotional challenges of her son's premature birth, and how that impacted her marriage.

In August 2012, when Anna's water broke, she was rushed to an emergency room where nurses had to give her magnesium in the hopes of stopping her from going into labor.

"It came as a huge shock and suddenly, your world completely shifts," Anna said in her podcast, Unqualified.

"There were a lot of medical professionals in that room, and that's when the fear really set in, as well as the reality that my son might be coming two months early," she wrote in her memoir. "The magnesium worked, fortunately, but the doctors were very clear that I would not be leaving the hospital until my baby was born."

After spending a week in bed, Anna went into excruciating labor, and Jack Pratt was born nine weeks early.

"That's where the unexpected nature of this whole fiasco really hit home," she wrote. "When you have a healthy pregnancy, you never wonder if you'll get to hold your son right after he's born. It's a given. I was terrified, but I also knew I had to be a soldier." 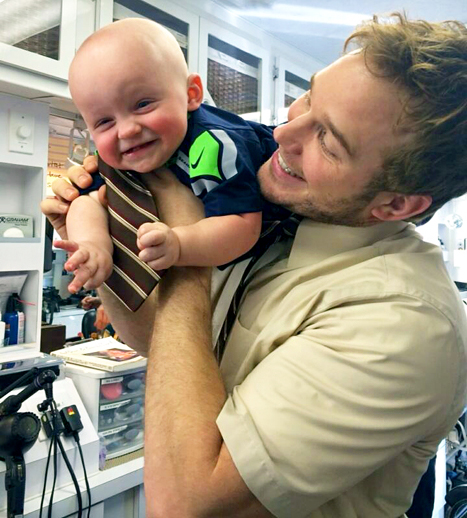 Jack, who was described by Anna as a "minuscule noodle," was taken to an intensive care unit for premature infants. A few days later, his brain started bleeding, which meant there could be a chance that their little boy could be developmentally disabled.

"There's a shield you build when faced with obstacles like these, largely for your own self-protection and the protection of your child. So Chris and I did what we could, which was hold hands and hope and face it together," she wrote.

"Jack had a few surgeries "“ he had a few hernia surgeries, he's had a few eye surgeries and he had a little heart issue as well," she shared.

A month later and at only four pounds and three ounces, Jack was discharged and could go home with his parents. However, he was still seeing specialists every day to make sure he was developing like any other healthy child.

Jack is now five years old and has some issues with his vision and leg muscles, but is considered healthy.

This little dude is bass fishing crazy. Just like his daddy!

Although Anna and Chris announced their separation in August, the actress said the experience brought them closer.

"These moments can be hard on couples, but for us it really brought us together," she explained. "It felt like it was us against the world."

The former couple are now supporters of the Global Alliance to Prevent Prematurity and Stillbirth.

What better way to ring in the sweater weather and Halloween vibes with a few bong rips and scary movies? There’s really no other way you should watch a scary movie than to be stoned out of your mind, right? So in the spirit of October and staying indoors, the only thing you should be thinking about is the list of scary movies to watch high. Gather up your best munchie favorites, have a
Read More →