I love cake so any celebration that calls for the sweet confection automatically becomes a favorite of mine.

This is one of the reasons why I also love going to weddings.

Sure, the bride's dress, the decor, and the exchanging of vows are all highlights of a couple's special day, but the biggest crowd pleaser at almost every wedding I have been to has been the cake.

For hundreds of years, it doesn't matter how big or small the reception is, cake has always been a part of the big day and it made it just that much more special.

Of course, the style and flavors have changed through the years, so let's take a look back at how wedding cakes trends have evolved over the last couple of decades.

Cakes from the Edwardian era were a lot more subtle than we're accustomed to today.

The bride's family would often be the ones in charge of making the treat, and they usually opted for a traditional sponge decorated with white icing and flowers.

The more affluent a family is, the whiter the cake will be because refined sugar was hard to come by.

It was also common practice to place a vase filled with a bouquet of flowers on top of the one or two-tiered cake.

Lillies of the valley and orange blossoms were popular flower choices.

Former president Woodrow Wilson's daughter, Jesse, opted for this style of cake when she got married in 1913.

Not only did the one tier become three or more, the cakes were also heavily influenced by the glamours and rebellious flapper culture (think The Great Gatsby).

The sponge layers were held together by lots of icing, and the outside featured bold and daring geometric shapes, art deco designs, jewel tones, lavish ornaments, frames, and feathers.

Cakes became more expensive because of the complex decoration techniques, so by the late 20s, boxed cake mix was introduced to the masses. This made it easier for lower class couples to also have a cake at their weddings.

When King George VI married Lady Elizabeth Bowes-Lyon in 1923, the cake included lots of flowers, figurines, and intricate patterns made with icing.

The swoon-worthy confection was 10 feet high and weighed a whopping 800 pounds!

Bakeries took over the creation of wedding cakes in the 1930s, so more couples were able to afford them.

They started adding the mini bride and groom figurines that have graced the tops of so many cakes ever since. These cakes usually had multiple tiers.

The Lambeth Method, a style of piping icing in multiple rows, become the most popular type of decoration by the mid-30s.

Bakers also used a variety of materials, including wood, plastic and porcelain to embellish cakes.

It was during this decade that the brides and grooms started the tradition of cutting the cake together in front of their guests.

The figurines continue to show up on the cakes during the 40s, but instead of a tux, the groom figure would be dressed in military uniform.

Since the Second World War was taking place, the recipes for the sponge were simplified and finished cakes had no more than three tiers.

The cakes were once again made at home but with less eggs, butter, and milk. People would add spices like cinnamon, nutmeg and cloves for flavor.

People would practice their piping techniques using mashed potatoes, so they wouldn't waste the actual icing.

To compensate for the lack of ingredients, the cakes would often be decorated using the Lambeth Method, then ribbons, flowers, and bows are added for extra oomph.

While the average person was worried about rationing, the British royals unveiled one of the most over-the-top wedding cakes for Queen Elizabeth II and Prince Philip's 1947 wedding.

The decoration was made using 150lb of marzipan and 110lb of icing sugar for the white royal icing.

Weighing in at 500 lbs and measuring nine-feet-tall, the cake took two weeks to complete.

Now that many people did not have to worry about limiting the amount of ingredients they use, cakes started gaining more height and ingredients.

Couples were inspired by the royal wedding that took place just a few years prior, so it wasn't unusual for cakes to have four to six tiers.

Instead of relying solely on spices, bakeries started incorporating muscovado sugar, high quality fruits, and liquor into the mix.

Former president John F. Kennedy and his wife Jackie O had simple yet elegant a four-foot tall cake decorated with intricate icing and fresh flowers at their reception in 1953.

Grace Kelly and Prince Rainier III of Monaco took things up a notch for their 1956 nuptials. Their six-tiered cake included a plastic replica of Monaco's Pink Palace.

They cut through the cake using the groom's sword.

Couples from this era's wedding cakes were mostly inspired by celebrity nuptials, and this meant that the cakes became taller and boasted intricate designs.

Bakers started to shy away from royal icing after discovering that boiled icing, also known as "seven minute icing" was much more versatile.

This quick icing is made by pouring hot sugar syrup over beaten egg whites.

Elvis and Priscilla Presley's lavish 1967 wedding cake is a perfect example of what the main wedding dessert looked like back then.

Bakers were finally inspired to try something new for the hippie generation.

The cakes started to include more more color in the decoration, and people weren't afraid to experiment with other decorative elements by using almond paste, ribbons, edible flowers, as well as other plastic trinkets.

The use of buttercream to create elaborate designs was becoming popular, but royal icing was still the number one choice.

This is because it hardened easily and held the tiers together better, especially since outdoor weddings were becoming more popular.

Just like everything else in the 80s, when it came to wedding cakes, you either go big or go home.

They were made with dark fruit batter and decorated with fountains, pillars, and bridges that connect multiple cakes.

Sugar paste was also extremely popular because it was easy to roll out, shape and color. People used this to create colorful decorative elements, including flowers.

Those who mastered this technique started their own home-based cake businesses, and many were very profitable.

Prince Charles and Diana's wedding cake was the most-talked about of the 80s, and it's not hard to see why.

The five-foot-tall cake was designed by David Avery of the Royal Naval Cookery School and took 14 weeks to complete. It was decorated with royal family's coat of arms and flowers.

Some of the architectural elements from the 80s were incorporated into cakes in the 90s, but decade saw some new techniques that haven't been used before.

Edible flower decorations and sugar paste were still very popular, and couples added more personal touches to the cake by adding customized toppers that reflect their passions, sense of humor, occupations, or hobbies. 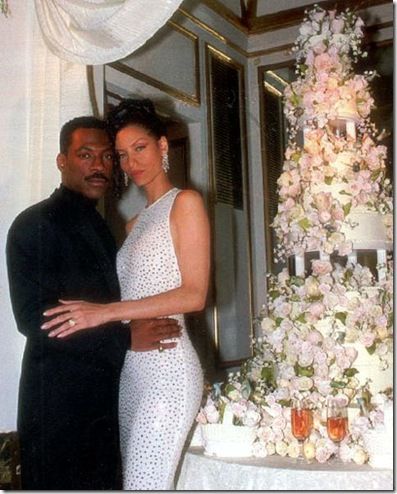 Confectioners started to use edible ink to create their masterpieces. However, despite all the color possibilities, couples in the 90s still preferred traditional icing hues like ivory and cream.

When comedian Eddie Murphy and his ex-wife Nicole tied the knot in 1993, their $25,000 multi- tiered ivory cake was covered in dozens of peach-colored flowers.

It was considered one of the most expensive cakes of the time.

Couples who got married in the new millennium moved away from traditional tiered cake separated by exposed pillars.

People began to get more creative when it comes to shape and decorations. The cake would often complement the rest of the overall color scheme, decorations and even the bride's dress.

Instead of simply sticking to the typical tiered cake, brides and grooms started requesting cupcake towers that match the main cake. According to multiple sources, a 2000 episode of Sex and the City is to blame for this trend.

Rustic-themed celebrations have become insanely popular, which led to a rise in "naked" cakes, a decorating technique where the frosting is spread thin and the cake's layers are visible.

These cakes are often decorated with flowers, greenery, berries, burlap, and wood.

Instead of the traditional bride and groom figurine, toppers have become a lot more creative and personal. Couples are now opting for acrylic cut-outs with personalized sayings, banners, whimsical objects, and figurines modeled after their pets.

Cakes are no longer just about height, but more about art. Couples aren't afraid to ask for bright colors and bold designs into their cake.

In fact, the fabulous 1920s art deco theme has recently become one of the biggest wedding trends.

The age-old tradition of having two cakes, the main show-stopper and a groom's cake, also saw a resurgence in the 2010s.

Brides go out of their way to surprise their new husbands with cakes that match their personalities or reflect their interests.

Also, more and more people are now opting for other types of confections like donuts, cookies, macarons, and pies instead of a standard cake.

Dessert tables featuring all sorts of confections are becoming the main focus.

Which decade inspired your wedding cake? Let us know in the comments!

Healthy eating is a crucial part of any weight loss journey. But trying to keep up with the latest food trends can be overwhelming and exhausting – especially when you’re busy, on a budget, or just not in the mood to cook. Luckily, you can make many simple swaps that have powerful benefits for your health and waistline without sacrificing flavor or convenience.Here are some foods notorious for weight gain and their healthy food
Read More →